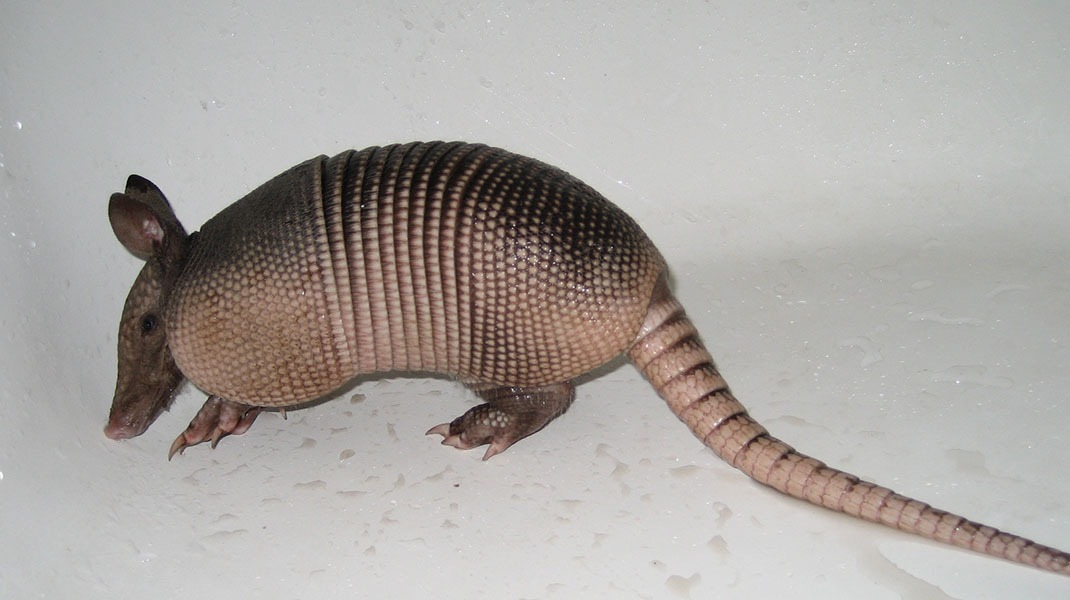 Armadillos are a species with a very distinctive appearance, with thick armored plates covering much of their body, the top of the head and their tail, which can vary in color from black and brown through to a tan color. The armadillo’s body is usually between fifteen inches and two feet in length, while the tail can add another eighteen inches to the overall length of the animal, and they will usually weigh between six and fourteen pounds. The breeding season is during the summer in the United States, and the female will then give birth around four months later, with a potential life span of up to fifteen years.

Although a species that originated in South and Central America, armadillos are normally found across much of the south and western states, and they can live in scrub and prairie lands as well as in forests and rainforests. Armadillos generally eat insects, and hunt by moving their snout through loose soil and leaf litter to find their prey, although they can also eat small amphibians, along with occasionally fruits and vegetable matter as well. Armadillos are known for their ability to leap up to four feet when needed, and for their defensive reaction of rolling into a ball that is protected from any attack by their armor plates.

Because of the way that armadillos hunt for their worm and grub food, this can cause a problem for those people who are proud of their pristine grass lawns, as armadillos can cause a lot of damage. Signs of an armadillo hunting for insects on a lawn will involve several small holes and piles of earth where the ground has been searched for insects and food.

Another of the issues that comes with armadillos is because of their habit of digging, as this can again make a mess and cause damage in a yard or garden. Although armadillos can jump quite high, they will generally prefer to dig their way under a potential barrier, which means that you could find several gaps beneath a fence if it only goes down to ground level. They also like to dig their burrows close to cover, so this can mean if it tries to dig its burrow near a shed or outbuilding, it could undermine the ground beneath that building.

Probably the best way of keeping armadillos away from your yard or garden is to have a fence that will keep them away from the area. Because armadillos aren’t great climbers, around four feet would be high enough to keep the animals at bay. As they are good diggers however, it is important to embed the mesh of the fence beneath ground level. It will involve some extra digging, but by embedding the fence by around twelve inches into the ground, it will be sufficient to prevent the armadillos from getting into your yard or garden.

You will also find that some sources suggest that castor oil can be a deterrent for armadillos, and that spraying or pouring this around the perimeter of your garden could be a repellent to keep armadillos away. Because this could be quite time consuming and the oil will usually get washed away meaning regular re-application, this is probably not as effective as having a good fence.

There are many animal control experts available who will be able to help you to get rid of an armadillo or several armadillos that are causing problems around your home. The safest and most effective way of removing problem armadillos is by using cage traps to catch the animals, and then to relocate them to another area that is well away from your property. They will usually place several cage traps which are usually located alongside fences or outbuildings where there are signs of armadillo activity.

Because armadillos are insectivores, there is no need to use bait when placing the trap, and as their eyesight is generally quite poor they don’t tend to be especially elusive. However, once the armadillo has been caught, it is then important to make sure that it is relocated a good distance away. When relocating an armadillo, they will always look to do so in a rural area well away from any other domestic properties.