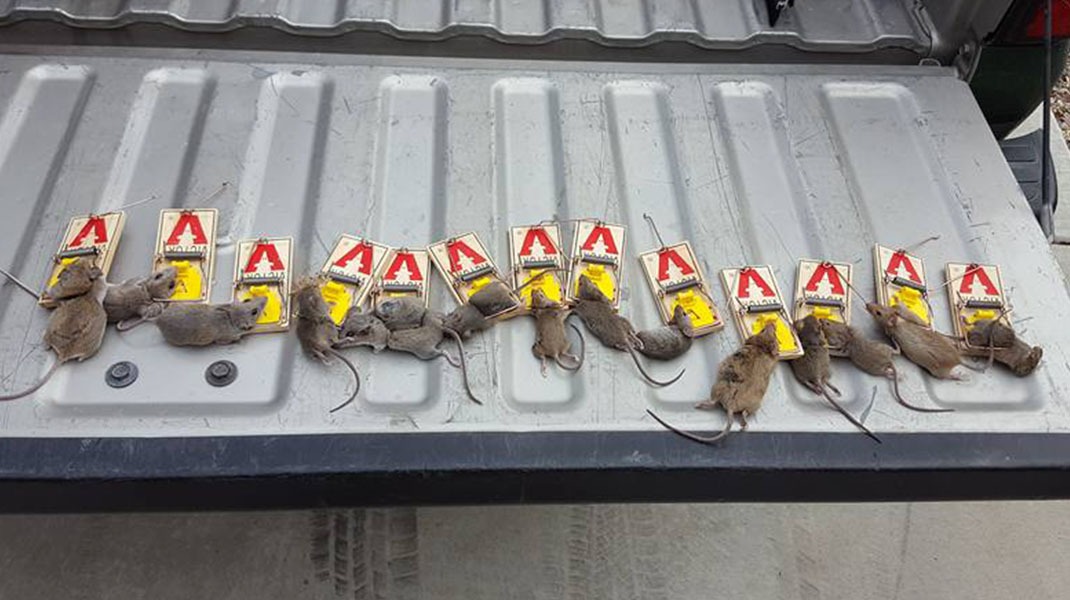 Mice are small rodents that are generally brown or gray in color with a lighter colored fur on their underside, with small ears and a long tail that is often longer than the animal’s body itself. While different mouse varieties can vary a little in size, they are generally between three and four inches in length, with a tail that can also grow to another four inches as well. Mice are generally quite small, and are much smaller than rats in weight as well, usually growing to a maximum of around an ounce and a half in weight, which naturally explains their caution and fear when they encounter people or larger animals.

Mice have a very high birth rate and will give birth to large litters, because they have a very high mortality rate, although those that do make it to adulthood can live to up to two years, with around six months being the average. Mice can live in a variety of different habitats, including rural and urban areas, with a significant majority of mouse populations to be found in urban or suburban areas. Mice are a successful species because of their adaptable digestive system, but in rural area will eat fruit, grains and seeds, although they can eat almost any type of food scraps found in urban areas.

Because they usually live in such close proximity to people, one of the biggest issues that can arise when there are mice present is disease transmission, and while this is occasionally from direct contact, it is usually when their feces or urine contaminates food or water sources. These diseases are often relatively mild when they affect healthy adults, although people who are more vulnerable can be at risk if they contract these diseases.

Another of the issues that can be caused by mice is when they find their way into domestic properties, and especially because of their nesting behavior. This can mean that they will gnaw holes around your property, shred or tear insulation materials, gnaw wires and wooden surfaces and soil any area of your home with urine or feces. Because of the amount of damage they can cause, where possible dealing with an infestation quickly can really help minimize the damage that they cause.

Probably the biggest factor that will dictate where mouse populations are likely to appear is the food sources that are present, so if you can remove the food sources then it can solve the mouse problem. Garbage and waste food is the main culprit here, so if you have a waste disposal unit, use these to deal with food waste, and try to minimize the food waste that goes into the garbage. When storing garbage or other food stores, try to keep them in a sealed can in an outbuilding or garage, or where this isn’t practical, make sure there are no gaps around the lid of your garbage can that will allow mice to crawl in.

Another step that you can take is also to minimize other food sources around your property, so if you grow fruit or vegetables try to do this in a greenhouse. Also, if you have fruit trees, then picking up any fallen fruit promptly can also help remove a potential food source. Mice are also very fond of cover, and because of their timid behavior they do not like to be exposed, so removing potential sources of cover such as woodpiles, shrubbery with foliage at ground level and other sources of cover around your home can also help to keep mice away.

When it comes to dealing with mice professionally, the most common approach that animal removal technicians will take is to use snap traps to catch and kill the mice. This is the most traditional approach, and will involve setting several traps around your home in the areas where the technician can find signs of mouse activity. This approach is generally quite effective, and can deal with a small or large mouse infestation, although it does require regular checking and re-setting of the traps until all of the mice have been killed.

Another option that is sometimes used is exclusion, and this involves a very detailed examination of the property to find all of the points the mice are using to get in and out, before they are sealed, with an exclusion funnel installed on the remaining one or two holes. While this allows the mice out and stops them getting back in, it can be frustrating, as mice are so small they can squeeze through small holes that can be easily missed. If you ever have someone suggest using poison, avoid this as it is inefficient, can lead to other problems, and can also be dangerous too!