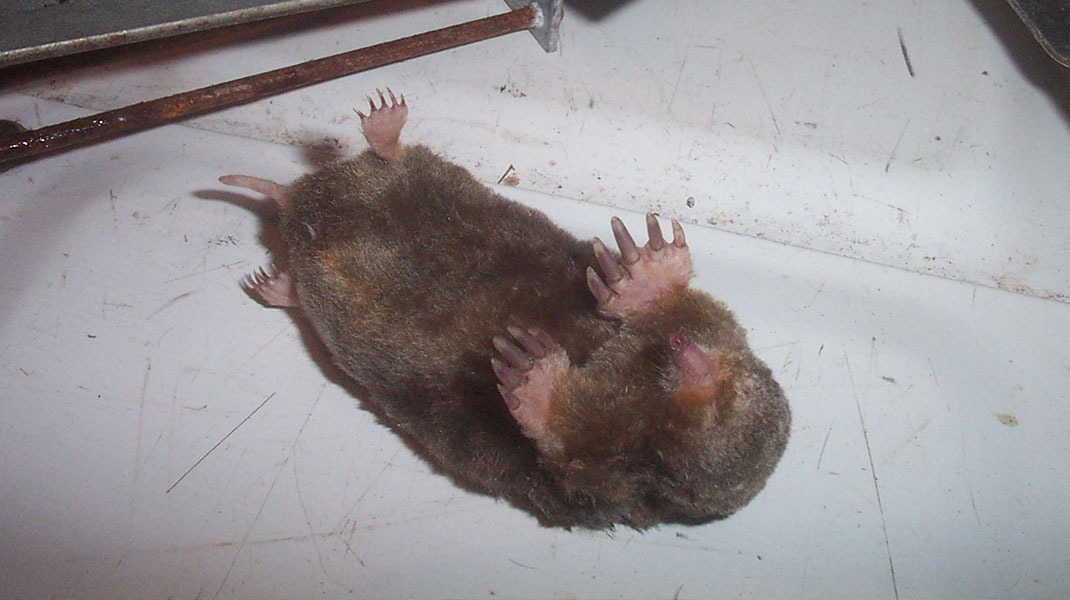 Moles are small mammals that are relatively rarely seen above ground, but they have cylindrical bodies with dark brown or black smooth fur, and large front claws that they use to move earth when underground. Moles will usually grow to around six inches long, although they can be as small as four and a half inches long, while they will rarely weight over four and a half ounces. Because moles have relatively little contact with people and animals above ground, they have relatively low mortality rates meaning they have smaller litters, with most moles living between 2 and 3 years.

When it comes to their habitat, moles can be found in almost any area where the soil is relatively moist and can be moved quite easily, although they are particularly common in grasslands, woodlands and rural areas, although they can find their way to gardens and suburban areas too. Moles live almost exclusively underground, and survive on the earthworms and insects that they find beneath the surface. Moles are generally quite timid creatures, rarely exploring above the surface where their poor sense of sight makes them vulnerable, so they spend their lives digging tunnels and finding insects and earthworms to eat.

For those people who live in apartments or urban areas with very little grass or green space, then it is quite rare for moles to become a problem. The main issue that moles can cause for people is when they find their way into a garden or yard, especially if there is a nice green lawn that has been well maintained in that space. While moles are digging beneath the ground they displace soil, so they do then push this soil to the surface, which then creates the distinctive molehills which can be a huge frustration if you have worked hard to get a nice lawn.

Another issue that comes with moles digging in your yard or garden is that they can make the soil uneven, and it is not uncommon for a mole tunnel to collapse on itself, leaving a distinct trough in your lawn. This can then lead to tripping or falling hazards if the ground were to give way as you stand on it.

Because of the very nature of the biology of moles, there are actually relatively few prevention approaches that can effectively keep them away from your property, especially if you are living in a rural area. If you are remodeling your garden, then one step that you can take when laying a new lawn is to place a layer of wire mesh under the soil surrounding the lawn, and this will allow for drainage and lawn maintenance, but will stop moles from being able to dig under the lawn.

Other repellent methods are a little more hit and miss and anecdotal, and there is relatively little evidence to support them. Some gardeners will suggest planting flowers like daffodils, marigolds and alliums, as moles are said to find the scent of these flowers and the impact they have on the soil to be unpleasant. Another option that isn’t ideal is to water your lawn less often. This will make the soil drier and reduce the food sources that will sustain the mole as it digs beneath your garden.

When it comes to getting rid of moles effectively, your animal removal expert will tell you that trapping is really the only way. While poison can be an option when you are dealing with most pest animal species, albeit an unpleasant option, moles only eat live prey, so wouldn’t consume this.

There are two types of trap that could be used to deal with moles, which are live traps that would allow you to catch and remove the mole, or lethal traps that will kill the mole. Live traps will come in a tube shape that needs to be embedded into one of the mole tunnels, and when the mole triggers the trap both ends will close catching the mole. Lethal traps can work in a similar way, but will have a noose that will suffocate the mole in the trap. Lethal traps can also be of the ‘scissor trap’ variety, which will be spring loaded and will snap together with force to kill the mole when it is triggered.