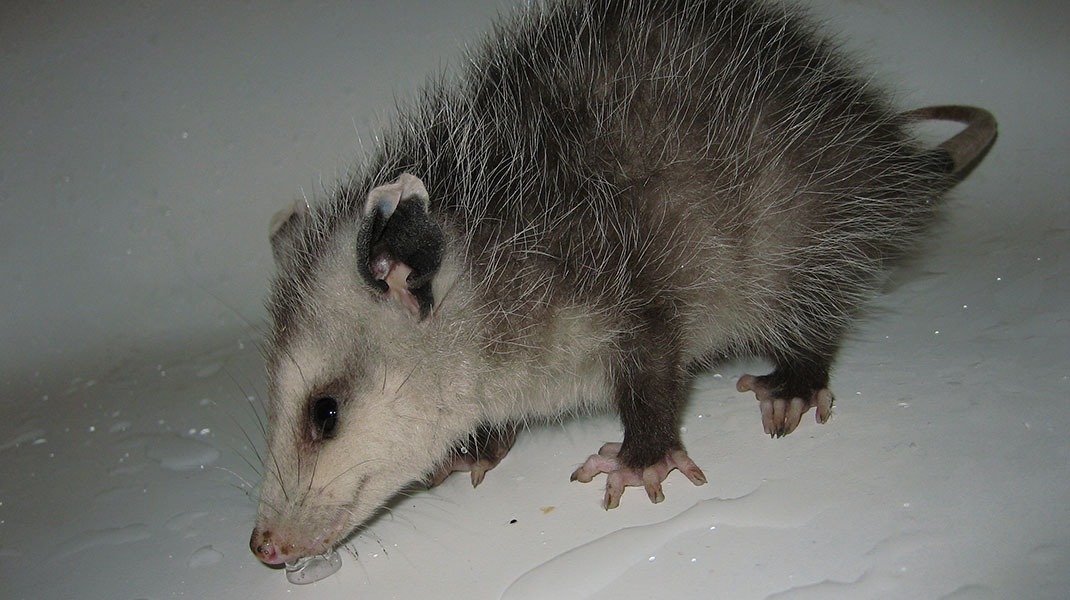 The Virginia Opossum is an animal that can be easily identified by the white fur on its face and the gray fur that covers the majority of the body, with a pink tail and nose that can stand out. Depending on the habitat and food sources they can grow to between one and three feet in length, and can weigh up to fourteen pounds, although the females are generally lighter than this. The female can give birth to up to 30 babies in a litter, but as she only has 13 nipples, only a maximum of 13 babies can survive, but due to a high mortality rate, only around 10% will survive to adulthood, with even those opossums not living beyond two years in most cases.

The opossum is found throughout much of the United States and Canada to the east of the Rocky Mountains, and south into Mexico and Central America, although will not generally survive in very cold areas. They are omnivores and can take advantage of any foods available, with a diet often including fruit, seeds, insects, mice and any carrion that it may find. The opossums are probably most noted for their habit of playing dead when threatened, where they reduce their metabolic rate to a very low level, and can appear to be dead for several hours.

As with many animal species that is adaptable in their diet and are good scavengers, it is this ability to seek out food sources that can make opossums a problem in urban and suburban areas. Where garbage has been left they will often tear through garbage bags to look for the scraps of food inside, while they will also often steal pet food and food sources in gardens as well. Unlike many other pest animals however, the opossum appears to be resistant to some diseases such as rabies and Lyme disease, but can still transmit other conditions.

The other issues that can be caused by opossums are related to their nesting behavior, as when they are present in urban or suburban areas, they can try to make a nest in or around domestic properties. Once they find their way into a cavity in the attic, wall, or basement, they can then cause damage to insulation materials and other surfaces through making a nest, or simply because of a build up of their feces and urine.

When it comes to keeping opossums away from your home, the most important thing you can do is to keep the potential food sources and scent of food that could attract the opossum to your home to a minimum. Make sure that where possible garbage bags are stored inside in a garbage can or sealed container, or where this isn’t possible that they are kept in sealed garbage cans to minimize the food scent that can escape. Also, where you have pets and keep pet food, again try to keep this indoors where possible and always inside a sealed container.

When it comes to keeping opossums out of the property itself, good property maintenance is very important, so ensuring any broken vents or gaps in the property are sealed. Also, checking around the roofline to ensure that any spaces that an animal could squeeze through are also sealed will help to keep the opossum out of the house.

The best way for dealing with an opossum that is causing an issue around your home or property is by using a cage trap to catch the animal, which is how most professionals will deal with the situation. This will be placed in an area where there are signs of the opossum being active, and will be usually baited with food that has quite a strong scent, such as meat or fish. These traps will then need to be monitored regularly until the opossum has been caught, and it can then be safely relocated.

When relocating an opossum, the professional will locate a spot that is at least ten miles away from the property where it was caught, and ideally look to relocate it in a rural area away from other properties. The animal removal expert will wear thick gloves and cover the trap while it is being moved to minimize contact and the potential for scratches or bites from the animal. They will then release the opossum and stay clear while the animal is released into its new habitat.