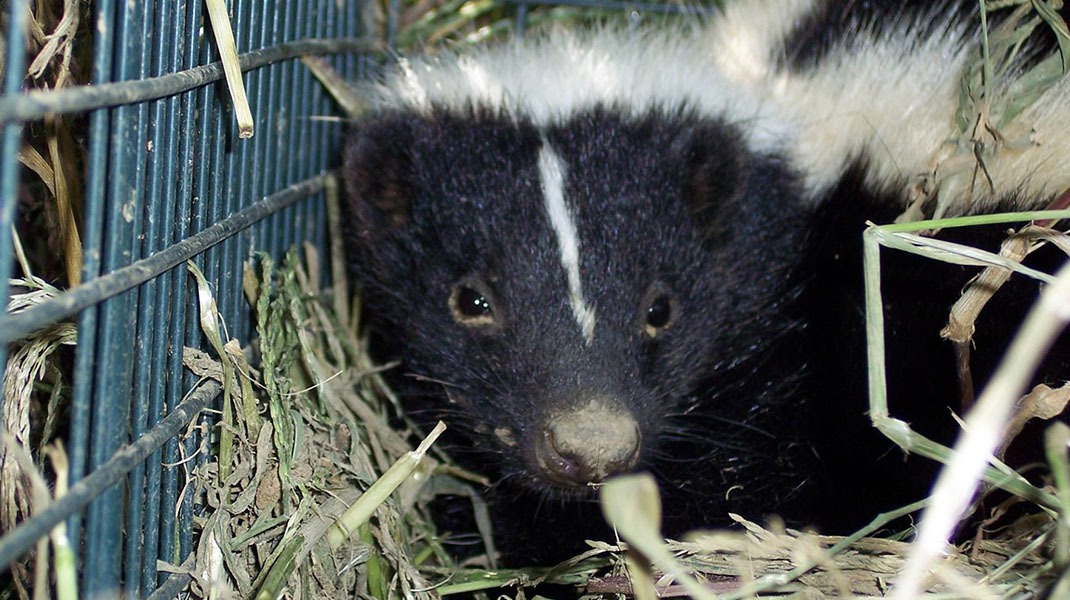 Most skunks are easy to spot, as their coloring is a warning to other animals to stay away, and the most common color for a skunk is black fur with distinct white stripes running down the animal’s body. They can usually grow up to around three feet in length, and will have a large furry tail, while they will commonly weigh between five and ten pounds, although this can vary with the variety of skunk. The breeding season for skunks is in the spring, with a litter born between May and June, and most will live for between two to three years, although in exceptional cases they can live for two to three times that long.

Skunks are adaptable enough to live in a variety of different habitats, including woodlands, valley and rocky mountain areas, although they can also survive in urban or suburban areas. The animal’s diet is generally based on insects and small animals for much of the year, although where necessary they can adapt to the food sources available, including fruits, eggs and small animals such as mice and voles. Skunks have their distinct markings to warn other animals to stay away, but for those animals that don’t heed the warning, a skunk can spray a foul pungent scent accurately over several feet.

While skunks are generally quite cautious animals that will avoid people, one of the biggest problems they can cause is when they encounter domestic animals, and then spray those pets. If the pet is then able to get into the home before their owner recognizes that they have been sprayed by a skunk, then it can make the odor in that home very unpleasant for several weeks before it eventually fades. Skunks are also known for being one of the main rabies carriers in the United States, so if they scratch of bite other animals or people, there is a potential for disease transmission.

The other issues skunk cause come from their foraging and nesting behavior, and they are known for digging through garbage to find food, which can lead to garbage sacks being ripped open. They will also burrow under outbuildings or plants when they are nesting, and can cause damage through this behavior.

Skunks are generally poor at climbing, so one of the best measures that you can take to keep skunks away from your property is to have a well maintained fence around the property. When you are installing the fence, it can be a wise precaution to embed the wire mesh of the fence about six inches into the soil, as this will help avoid the skunks being able to dig their way under the fence.

The other factor that can attract skunks to your property is the availability of food in the area, so managing this can also help to keep skunks away from your property. If you have pets, where possible look to keep pet food indoors, and feed your pets indoors as well. Where this is not practical, ensure that any pet food is kept in a sealed container, and if you do put down food for pets, try not to leave it sitting on the deck or in the yard where it can attract skunks and other animals. Managing garbage can also help, so look to keep garbage in a garbage can with a lid, preferably in an outbuilding or garage, to prevent the spread of food smells.

Because of the risk of being sprayed by a skunk, it is natural to want to get a professional to deal with the animal on your behalf, and they will generally have the experience to do this successfully. Most professionals will look to use cage traps to catch the skunks, and these will usually be placed in the areas where the skunks are most active. Bait can really help to draw the skunk into the trap, and a food such as meat or fish will often be used to bait the trap.

The real challenge for the professional comes when it comes to moving and relocating the skunks. Covering the trap in a blanket or tarp will help to avoid being sprayed, and most professionals will look to transport skunks in an open flatbed truck rather than inside a van where possible. The skunk should then be released in a rural area that is a good distance away from where it was caught, to minimize the chances of the skunk returning to cause further problems.