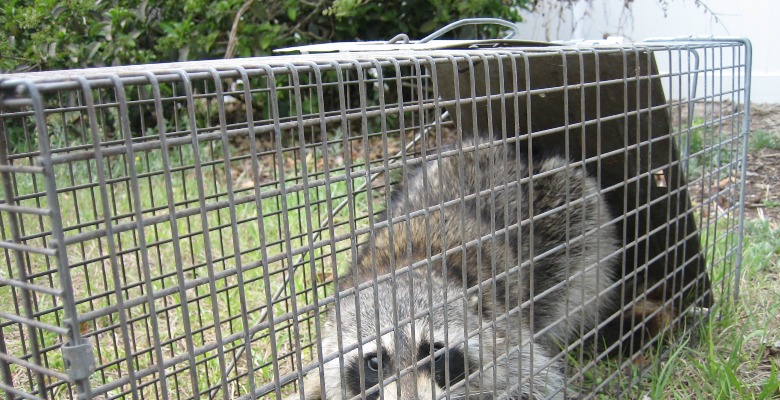 Raccoons are smart, agile creatures, and it’s not uncommon for them to find a way into attics, crawlspaces and chimneys of homes. There are five steps to get rid of raccoons, and these are:

These steps make raccoon control sound simple, but this is a situation best handled by a professional wildlife remover. Raccoons are smart, and though they are considered shy, if they have babies in the home they may stand their ground and fight if you attempt to disturb the den area. Raccoons can also expose humans to several contagious diseases, including the deadly virus rabies. It is always best to have a professional or experienced person handle a raccoon in the home for these reasons.

To get rid of raccoons, the home will need to be completely inspected. Just because a raccoon is living in the attic doesn’t mean it necessarily has an entry hole at attic level. Once the openings are identified, the trapping process is ready to begin.

Why are raccoons in my home?

The majority of raccoons in homes are females looking for a safe area to raise their young. How you handle babies depends on the area of the home dealing with the raccoon issue; babies in a chimney, for example, may be impossible to remove before dealing with the adult animal. Babies in an attic or crawlspace can often be removed while the adult is out scavenging. If you can remove the babies first, you can use them to lure the adult into a live cage trap and then the family can be relocated together.

Handling baby raccoons is best done with thick leather gloves. Just because the babies are small doesn’t mean they won’t bite or scratch, and like adult raccoons, babies may have infectious diseases. Handle the young gently and with protective gear, and place them in a warm basket or area where they can’t crawl out and get away. Handle the young as little as possible, and keep them in a quiet, dark area until you are ready to use them to lure the mother.

What is the best way to trap raccoons?

Adult raccoons in crawl spaces and attics can be trapped with live cage traps or excluded with one-way doors–or a combination of both. If using a live cage trap, the babies can be placed inside and when the mother enters to inspect them, the door of the cage trap will spring shut behind her.

A raccoon with no young can be kicked out of the home by installing a one-way door on the opening it uses as an entrance or exit, but be prepared for the raccoon to become destructive as it attempts to chew and claw its way back inside. Ideally, one-way doors can lead into cage traps on the opposite side. This allows for the raccoon to be secured and then relocated to a different area many miles away.

To get rid of raccoons in the chimney, the use of exclusion and trapping is typical. The adult raccoon is shooed up the chimney and into a cage trap installed on the top of the flue. Babies, usually sitting on top of the damper in the chimney, can then be removed by hand. Getting rid of raccoons in a chimney is very difficult because of the tight space to work in, and unlike other areas of the home, it’s not easy to take apart a chimney wall to gain better access. A wildlife professional will have the correct tools for this job, and it is well worth your time and money to hire someone experienced.

Whatever you do, it is not appropriate to start a fire to get rid of raccoons in a chimney. Many people assume the smoke and heat will force a raccoon to flee out the top and the problem is solved. In reality, opening the damper in order to start a fire often results in a panicked animal dashing into the home rather than up the chimney. What’s more, it is unethical and inhumane to let any babies on the damper suffer a horrible death from burning alive. In some cases, debris in the chimney from animal occupation can cause a chimney fire and put the house in danger.

Because of how tricky it can be to get rid of raccoons, prevention should always be a homeowner’s goal. By keeping a home in good repair and eliminating food sources like garbage cans, gardens, pet food, and compost piles, the risk of having a raccoon move into a structure is significantly reduced.