How to remove raccoon in the attic 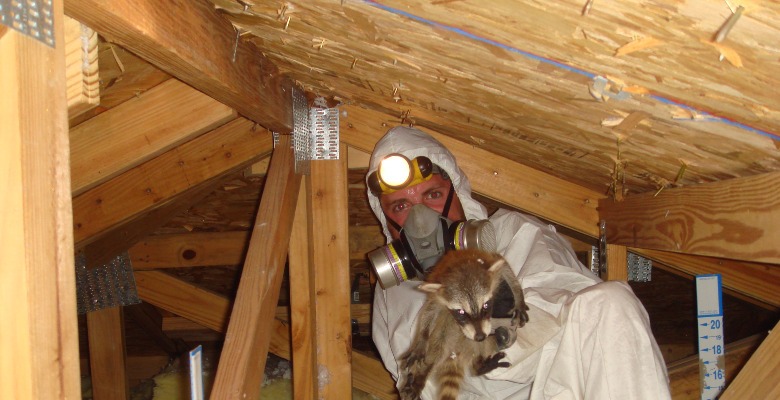 There are two places in a home raccoons like to make their den areas: chimneys and attics. Attics offer space for a raccoon to move around in without human interaction, and they also provide a warm, dry place where other animals and predators can’t approach. The more clutter in an attic the better; clutter provides more hiding spaces should the human occupants become curious.

How do I know if there is a raccoon in my attic?

Most people become alerted to a raccoon in the attic from the noises overhead. A lone raccoon may be quiet for the most part, but the majority of raccoons in attics are there because they are females looking for a safe place to have their babies. Baby raccoons are not nearly as quiet as adults, and all kinds of sounds will eventually be heard, from scratching and chewing to the soft cries of hunger when the mother is out scavenging.

To remove a raccoon in the attic, avoid the initial impulse to go up there with a broom and try shooing the animal out. The raccoon has an opening somewhere in the roof or eaves of the building, and chasing it away means it will just escape through one of these holes and return later. If the raccoon has babies present, she may become aggressive if you enter the attic with the intent to threaten her.

Should I hire a professional to remove a raccoon in my attic?

This situation is one best suited to a professional for a number of reasons. First, many state and local governments prohibit homeowners from interacting with wildlife without a license. Yes, that means most homeowners aren’t allowed to trap and remove wild animals unless they have the appropriate paperwork and credentials. Another reason a professional is the best option to remove a raccoon in the attic is because raccoons can be sizeable, and they can carry potentially deadly diseases like rabies. An inexperienced homeowner attempting to handle a raccoon in the attic may end up injured and in the hospital. Rabies, a viral infection, is incurable and fatal. Finally, homeowners may be successful in removing an adult from the attic, but may not be as lucky when it comes to any babies. Raccoon babies can be difficult to locate, and it is inhumane t leave them somewhere inside the attic walls to die of hunger. Eventually those baby carcasses will start to decompose, and the smell will fill the house and remain until the organic material dries up (which can take many months) or is removed. In either case, it’s simplest to find the babies while they are alive and remove them at that time.

Can I trap a raccoon myself?

If hiring a professional is not feasible for your situation, and you decide to trap and remove the raccoon in the attic on your own, live cage traps are the best option. Most farm and tractor stores sell these traps, and they can be placed in the attic around where the raccoon travels. While bait is not necessary, you can place some cat food on the trigger plate to help draw the raccoon inside.

Live cage traps are best used in combination with an exclusion door. The trap is attached to the exterior of the hole the raccoon is using to enter and exit the building. The hole if fitted with a door that will allow the raccoon to go out but not back inside, and once the animal is out, it finds itself in the cage attached to the door. This is a common method used for trapping and removing squirrels, another animal that loves to live in attics.

Many experts recommend trying to locate the baby raccoons first, while the mother is away. Once the babies have been gathered together, they can be placed inside the live cage trap and used as bait to get the mother to enter. This is often an ideal way to remove a raccoon in the attic; mother and babies can all then be relocated together.

Animal relocation is another issue often dictated by regional law. Areas that allow trapping and release generally recommend animals be put back into the wild no closer than ten miles from the home they were removed. This prevents determined wildlife from trying to find their way back to the home site. Of course, live trapping and removal is pointless if you deposit the animal into an area where it can’t survive. Make sure all relocation areas have shelter, food and water available.

Not all local governments allow release of nuisance animals back into the wild. Some counties require animals taken from a home to be humanely euthanized–another reason to consider hiring a wildlife specialist. Not only will the specialist take care of the trapping aspect, he or she will be able to transport the animal for euthanasia at an appropriate facility.