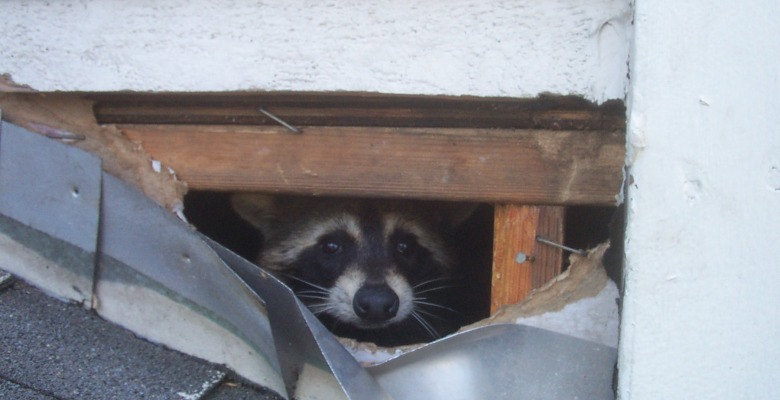 Appearance: Raccoons are mammals averaging between 10 and 40lbs. They are dog-like in appearance, but have distinctive dark masks of fur around the eyes and dark rings on their bushy tails. Unlike dogs or cats–for which they are commonly mistaken–raccoons have a wider range of motion in their hands and feet, allowing them to pick up items and grasp things as they climb. They are smart enough and dexterous enough to open latches on doors and peel lids off trash cans. In fact, the English word “raccoon” is an adaptation of a native Powhatan word meaning “animal that scratches with its hands.” Raccoons can range in color from silver to dark brown, but they always retain the dark tail and facial markings typical of their species.

Habitat: The raccoon is a very versatile animal and can live in almost any environment with a moderate climate. Raccoons are seen in all over the world in wooded areas, prairies, wetlands, and urban zones–anywhere they can scavenge enough food to survive. Raccoons have become particularly fond of living close to humans. There is so much food available in the form of trash and vegetation, many wild animals eat better near humans than they would out in the wild. Once in an area where food is reliable, raccoons are not picky about where they make their dens. Just as they are opportunistic with food, they are opportunistic with living space. Raccoons may live in hollow trees, logs, the empty dens of other animals, damaged human buildings, or piles of debris, among many other places. As long as the area is moderately protected from weather and predators, it will be a suitable home. Raccoons are primarily nocturnal, meaning they conduct most of their activities at night.

Diet and Hunting: The raccoon diet out in nature is one consisting primarily of fruit, nuts, seeds, eggs, and smaller animals like frogs and fish. As a general rule, raccoons are scavengers and not very picky about where their meals come from or if they were alive or dead at the time of consumption. Raccoons are omnivores, and therefore interested in everything from rotten meat to ripe tomatoes. Around human abodes, raccoons won’t hesitate to eat pet food or rummage through garbage cans to grab organic scraps. Raccoons prefer to obtain a meal without spending hours hunting so they actively look for birds’ nests to plunder and frequent marshy creek areas for lazy frogs.

Unique behaviors: Raccoons are driven by basic instinctual needs: find food, find shelter, raise young. But in between all those processes the animals have some interesting habits, especially with one another. Raccoons have around 200 different sounds and calls to communicate with one another, and adults tend to live in small, gender-specific communities where they can look out for one another. Because male raccoons can be aggressive toward their young, female raccoons will become solitary to give birth–one reason why they often end up in attics or in crawlspaces. Most people don’t realize it, but raccoons are excellent runners and swimmers, staying in water for hours at a time.

Mating: Mating for raccoons takes place in the late winter-early spring, with female raccoons having a litter approximately 65 days after fertilization. Most females begin reproducing around the age of one, and babies stay with the mother until they are at least one year old. The male raccoon does not take any part in the raising of young and may actually kill the babies.

Diseases: Raccoon are among the most well-known animals for carrying the virus rabies, but there are other diseases present in the population. Raccoons can leptospirosis, roundworm, trichinosis, and distemper. These diseases are communicable to humans, which makes the handling of raccoons frowned on by public health officials.