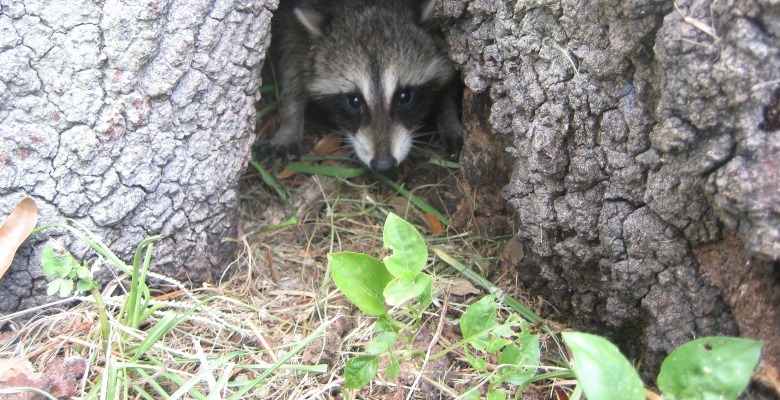 There are many products on the market that claim to be raccoon repellants. Most of these items play off of human sensibilities for marketing, conning consumers into buying products that have no realistic scientific support. In fact, the Federal Trade Commission has issued consumer warnings about many of the items labeled as wildlife repellants, noting most are fraudulent.

There are a handful of primary repellants on the market:

There are also a number of do-it-yourself home remedies which tend to focus on using smell as a means of keeping wild animals away. Homeowners looking for information on the Internet encounter dozens of articles encouraging the use of essential oils–particularly peppermint oil–as effective repellents. Gasoline and lemon juice are also commonly cited for do-it-yourselfers who want to save a little cash and be more environmentally friendly doing it.

In reality, there are no true raccoon repellents. Buying any products for this purpose is just a waste of time and money, and will likely result in more frustration if raccoons are being a problem around a property. The only real way to handle nuisance raccoons is to trap and remove them while fixing any issues around the home that drew the animals there in the first place.

To understand why raccoon repellents don’t work, consider the following:

Sound machines: It’s true, no living creature wants to be around loud noise all the time, but this is not how sound repellents work. Sound repellents typically blast a loud noise at timed intervals, spooking any animals in the area. The theory is that the occasional noise will prevent a raccoon from creating a permanent living space. The reality is the loud noise may scare the raccoon initially, but once the animal learns there is a predictable pattern with no accompanying danger, it will ignore the sound.

Ultrasonic machines: Ultrasonic machines take the sound repellent plan one step further. Using the concept that animals can hear higher frequencies than humans can, these products promise the ultrasonic frequency will continuously hum and drive a raccoon crazy, forcing it to leave or preventing it from staying in a location. The reality is these sounds–if they are even being emitted–aren’t loud enough or accompanied by anything threatening, so again, the raccoon will just ignore them. If you could live with a dull hum in your home, why should a similar sound chase off a wild animal just because it is “ultrasonic?”

Odor repellents: Perhaps some of the most popular repellents are those based on the sense of smell. Products and home remedies of this nature utilize the theory that animals, who have stronger senses of smell compared to humans, are therefore more sensitive to odor and won’t be able to tolerate a potent smell. In reality, while animals do have a stronger sense of smell compared to humans, there is nothing to suggest this ability makes them more sensitive to odors in general, or that the difference is so drastic a minor smell to a human would be overwhelming to an animal. The reality is: if you can tolerate the smell and it doesn’t scream danger, chances are it has the same effect on a raccoon. There is nothing about peppermint, for example, that is alarming to a wild animal. To keep one away, you’d likely have to use so much of this type of oil that you, too, wouldn’t be able to stay in your own home.

Not all odor repellents are made equal, however.

There is one type of repellent that does have some success, and that is the use of predator urine. Raccoons can fall victims to large carnivores like coyotes and dogs, so they are instinctually wary of such situations. Spraying coyote urine around your property may keep raccoons away for a short while, but the downfall of this form of raccoon repellent is there are no actual coyotes to back up the threat. Wild animals are smart; a raccoon knows that just because it smells a coyote doesn’t mean one is actually around. While predator urine may make a wild animal more cautious, it won’t often keep them at bay for long.

Strobe lights: Strobe lights are annoying, but like sound machines and odor repellents, they don’t do much to keep raccoons away. There is nothing threatening about a strobe light, and if anything it just makes it that much more difficult to see a raccoon if one is living in your attic or crawlspace. Remember, a raccoon isn’t going to be out in the open when lights are typically placed. When a wild animal invades your home, it is looking to hide within the walls and inner areas. It won’t be that difficult for a raccoon to get out of the annoying light of a strobe.

Texture repellents: The least effective of all raccoon repellents is probably a texture repellent. The Internet is full of suggestions from people about slathering walls and attic floors with mineral or vegetable oil to discourage a raccoon from staying. Raccoons have no textural weaknesses; they aren’t going to leave just because the floor is a little slippery. If anything, as scavengers, raccoons would be more likely to chew on surfaces coated with something like mineral or vegetable oil.