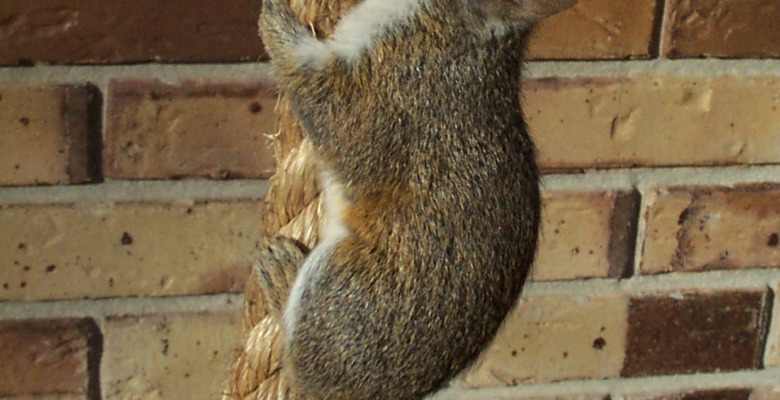 Where there are trees, there are usually squirrels, and this is true throughout the majority of North America. The squirrel is a smart, agile, opportunistic animal, making it difficult to keep away from human properties. Few fences can keep a squirrel out, and they are able to climb even smooth surfaces. Out of frustration, many homeowners believe the only option is to kill squirrels.

For larger nuisance animals, hunting may seem reasonable. There are many proficient hunters who are able to take care of the occasional woodchuck or raccoon with a gun or a bow–but squirrels are a different story. Yes, an arrow or a bullet will kill a squirrel as efficiently as a larger animal, but squirrels rarely sit still and coupled with their diminutive size, this makes them a difficult target even for the most accurate shot. The last thing you want is to be taking erratic shots at a squirrel darting around your property. It doesn’t take much for a random arrow or bullet to ricochet into a neighbor’s yard.

What lethal methods are there for handling squirrels?

There are other lethal methods available, though these are not necessarily a better option. One of the most common ways to kill squirrels is with the use of poison. This method has a number of drawbacks; first, there are no approved squirrel poisons on the market. Just because squirrels are rodents, doesn’t mean rat or mouse poison will be appropriate for them. Nonetheless, this is the typical route homeowners go. Poison is a horrible way for any creature to die. The two prevalent poisons available are anticoagulants and nervous system disruptors. Anticoagulants cause the blood vessels within a body to weaken and hemorrhage. Over the course of 2-3 days, the animal that ingests this poison will slowly bleed out and eventually die. Nervous system disruptors are no less cruel and can take even longer to work. These poisons cause seizures and interfere with the signaling of the animal’s nervous system. Eventually brain damage and organ failure causes death.

In addition to the ethical issues with poisoning squirrels, this form of animal control rarely works how homeowners want it to. The reality is not all squirrels will eat poison, and those that do may not eat enough of it to die. Those that become ill but recover will forever avoid that poison again; this is a safety instinct of many wild animals. If a squirrel does eat enough of a poison to die, that squirrel may crawl into the walls of a home or building where it’s carcass will decay and generate a foul odor. This smell will not go away until the body has dried out or is removed by hand. This makes poisoning squirrels in an attic very impractical. They are small enough to crawl down into the main areas of the home before they die.

For squirrels outside of the home, leaving out poison puts other animals at risk, including house pets.

Should I try to trap squirrels?

The most effective way to kill squirrels is through the use of large snap traps specifically made for squirrel issues. These traps are designed to clamp down on a squirrel with enough force to kill it instantly, much in the same manner as the smaller traps people are accustomed to buying for mice. Squirrel traps are much larger, however, and depending on the trap can sometimes be secured to the openings a squirrel is using if it lives inside a building.

If lethal trapping is your intent, hire a professional or make sure you are using the correct traps. Large mouse traps will not do, and many times rat traps are not adequate either. The size of the lethal trap must be matched to the size of the animal or you risk injuring the squirrels rather than killing them. An injured squirrel caught in a trap must be released or killed by hand–neither thing an easy task with a panicked, injured animal.

Before you let frustration immediately take you to lethal squirrel control, first consider squirrel prevention. Squirrels outside the home many never be completely banished, but their presences can be diminished by eliminating food sources like birdseed or vegetables gardens. Installing electric fencing can be an effective way to keep your gardens but discourage squirrel invaders.

Squirrels inside the home are less easily handled. Once inside an attic or crawlspace, squirrels should be trapped or excluded from the building under the supervision of a licensed wildlife remover. Trapping squirrels alive means they can be relocated and the areas they damaged in the home repaired. Once the problem squirrels are removed and the holes sealed up, the risk of other squirrels getting in is reduced. A professional wildlife remover can patch the areas of your home with professional-grade material so squirrels can’t chew their way back inside.