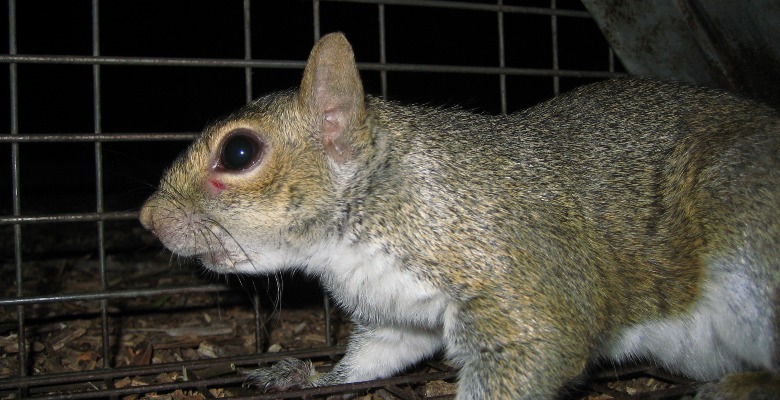 Squirrels are destructive when they are after something they want. We see this in small examples, like around birdfeeders and gardens; a determined squirrel will easily rip apart any barrier put up to protect seed or vegetables. Because of this destructive and intrusive nature, and because they are almost everywhere there are people, homeowners are often on the lookout for a good squirrel repellent.

Unfortunately, when it comes to squirrels and most other nuisance animals, there are no cure-all repellents on the market. There are many gimmicks out there to choose from, but many of these have been proven ineffective by the Federal Trade Commission. Among the most popular are ultrasonic devices, sound repellents, odor repellents, and predator statues.

At best, squirrel repellents offer a temporary solution to what can be a life-long problem. Predator scent sprays, for example, may briefly alarm a squirrel, but it won’t be long until the animal realizes there is no actual predator around. As a general rule, squirrels and other nuisance wildlife are smart enough to ignore most repellents of this nature. If you look at it from the animal’s point of view, a squirrel risks its life every time it ventures out of its nest. It is at the bottom of the food chain and is accustomed to a variety of threatening odors. It has to learn to combine its senses of sight, smell and hearing to alert itself to danger. A predator that is smelled only won’t necessarily raise the alarm unless there are other factors involved.

This is the primary reason why squirrel repellents don’t work. The repellents on the market can only appeal to one sense. Look at sound devices. These contraptions may generate a loud, scary sound that will startle squirrels, but after a while the squirrels will realize there are no other threats associated with the noise.

Then, there are squirrel repellents that aren’t even remotely based on wild animal behavior or instinct, and these types of repellents won’t work at all. This applies to products like “ultrasonic” sound machines, or home remedies using concentrated forms of essential oils like peppermint. This also applies to the notorious mothball method.

Can I Use Mothballs as Squirrel Repellant?

Mothballs are one of the oldest forms of squirrel repellent used in homes. Many homeowners believe that mothballs, because they are used to keep insects at bay, must be just as effective against other animals. The truth is that these little white balls are wonderful for their intended purpose: killing moths and other insects that destroy clothing. They aren’t effective at all against other animals, and what’s more, they contain known carcinogens and shouldn’t be handled without protective clothing. Yes, mothballs have a potent smell, but in order for that smell to be strong enough to keep squirrels away, it would also have to be strong enough to keep people away.

This is the major fallback to home remedies using peppermint oil or lemon peels. Just because animals have a more sensitive sense of smell when compared to humans doesn’t mean a rag with essential oils on it will drive them past their tolerance point.

There is a light machine on the market called The Evictor, which is supposed to flash like a strobe light but with a much stronger light, designed to hurt a squirrel’s delicate vision. There have been reports that this device does work well when used outside, along a squirrel’s direct route to food or water. For some reason, however, The Evictor doesn’t work indoors. When used to control an attic infestation of squirrels, the animals simply go deeper into walls or crawlspaces.

Someday there may be a squirrel repellent on the market that addresses the issues seen with traditional items on the market, but until then, the best way to deal with squirrels is through exclusion or trapping. Squirrels are everywhere, and because they are so agile it can be very difficult to keep them out of the yard. The best way to discourage large numbers of these animals is to eliminate their food sources. Keep birdseed on squirrel-proof feeders, and place some electric fencing around vegetable gardens. Squirrels can climb most fences, so electricity is necessary to discourage them.